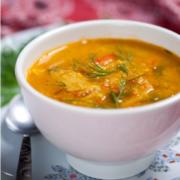 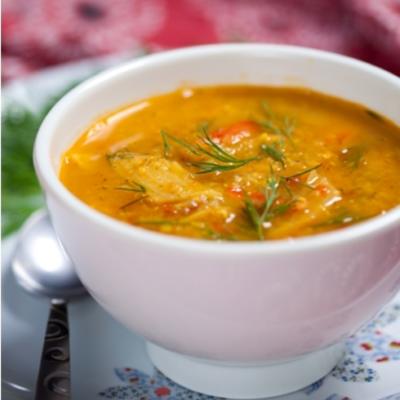 My version of Moroccan Fish Soup omits the verboten shellfish, and has very pleasing Moroccan overtones (this Moroccan can’t help it!)

Some Seder guest recently created quite a stir at my (kosher) table when she declared after tasted this Moroccan fish soup: “I can finally have fish soup. I could never taste it because I have an allergy to lobster. I see what I have been missing!” Incidentally, many people are staying clear of shellfish, so they can have this soup anytime. And no, it’s not the shellfish that makes it delicious: It’s the whole wonderful and simple preparation.

No Shellfish in Our Version

Although this soup is included in my first cookbook, Lévana’s Table, I just didn’t have the heart to leave it out. You can easily make a whole meal out of it. Oh, I know you will be told there’s no good fish soup unless you include all that shellfish, but wait till you taste this one! It simply has too much going for it to be missing anything. I have no quarrel with mock crab, which is made of all-natural pollock and adds great texture and flavor, which suits kosher diners as well as diners reluctant to use shellfish, just fine. I eliminate the separate broth-making step by wrapping the heads and tails of fish loosely in cheesecloth, cooking them with the soup and then discarding them without any mess. Cooking the soup with the heads intensifies its flavor and imparts a light gelatinous texture. This is every bit as interesting as the traditional French version containing shellfish: Besides, the Moroccan version never had any.

Heat the oil in a heavy wide bottom pot. In a food processor, grind the first set of ingredients coarsely. Add to the oil, and sauté until the mixture is translucent. Add all but two last ingredients and cook 45 minutes. Add the remaining ingredients and cook another few minutes, just until fish is cooked through.  Adjust consistency and seasonings.  Serve hot.