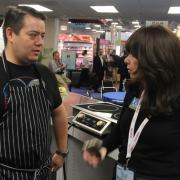 Kosherfest 2015, and the Kosherfeast Dinner that kicked it off, were loads of fun. This year’s Kosherfeast dinner was a meaningful Tikkun for the one which took place two years ago at the now-extinct J-Soho Restaurant (a mortifying debacle, followed by their closing down for good just a few days later. Thank Gd for small blessings!) and the one that followed a year later (to which I was not present, but which received mediocre reviews). As every year, Esti Berkowitz at PrimeTimeParenting.com, works very hard with Roberta Snyder Sherr at KosherEye.com to coordinate it, right after the blogger’s conference at the TACT Club downtown (what a shame I couldn’t attend), and just before Kosherfest. This year Kosherfeast seems to have kick-started in the street, right in front of The TACT Club, where Gabriel Boxer, a.k.a The Kosher Guru, sporting Harold Lloyd style glasses, exuberantly introduced and interviewed some of us (Watch Gabriel’s Kosherfeast you-tube video, and subscribe to his Kosher Guru Channel: We need the laughs!) while a bus graciously provided by Douglas Soclof at KitchnSynch rounded up its passengers en route to T-Fusion Steakhouse, somewhat impractically located about half a mile beyond subway reach. We were told our dinner would be a ten-course sampler, so imagine our surprise when we each found at our seat a cute wasabi-colored padded bag provided by Douglas, containing cut fruit and delicious-looking wraps, in case Heaven Forbid we got hungry on the 45 minute trip (!).

Let me start by saying dinner at T-Fusion was very good, putting in my two cents as I go along: The event was held at their new party space, located four doors from their main restaurant and Kitchen, and it is that seemingly insignificant distance from the kitchen to the party room that caused most of the mishaps that took place during the evening, two of the most egregious being that we were very cramped, and that we ended up with a room temperature dinner, down the line (more about that).

As promised, there were indeed ten courses, all very small, some of them tiny, their diminutive size compounded by the fact that they were presented in plates large enough to accommodate a portion ten times their size. Frisbee size plates, my pet peeve. Ha, minimalism! The menu was introduced by T-Fusion’s talented chef Daniel Rivera. We started on a high note with Himachi Crudo, sizzling fresh with a creamy miso caramel, crispy tortilla, popcorn shoots and ananas salsa (my two cents: Ananas was a mistake, as the himachi screamed for a much more contrasted layer of flavor: Wasabi, lime, jalapeno, maybe?). Thank you to a few of my table neighbors who wimped out at the sight of raw fish and bequeathed it to me (I was thrilled to oblige. Adventurous eater, see?). Next came a pretty and rustic looking Vegatable (sic) Ceviche: Local fall vegetables, ginger, soy, lime, yuzu; Sufganiot: I loved the whimsical presentation: A sandwich bag with a tiny donut filled with Chicken Liver Foie Gras (a misnomer, albeit very good) doused with orange muscat liquid jelly (My two cents: why was the donut sweetened since the filling was savory?); Moderne Waffle. I had a problem with this composition: sesame schnitzel with fig marmalade and lime foam on cold waffle. My two cents: if the waffle can’t be hot, and the logistics don’t allow hot, please let the waffle go. Likewise, the lime foam must have fizzled out on its way to our seats, as we all found a tiny white dot we could hardly identify, let alone taste; Fall shooters: Kabocha squash, nutmeg essence, anise fried “goat cheese”: very good flavors, needed a more contrasted layer of flavor (say, take out the anise and put in some ginger and/or orange zest). The highlight was the Reserve, a superb and superbly cooked steak, so fork-tender that even the die hard well-done-steak lovers couldn’t possibly object to its bright internal color; Charcuterie Clipboard: I gave that presentation the Grand Prix (My two cents: Marrow bone was a mistake as it arrived unappealingly congealed to our tables, and the beef tartare needed much more seasoning and condiment); Parasol Churros: Delightful presentation of the churros hanging from umbrella hooks, but the humor of it seemed lost on the sullen-looking waiter who carried it over his head as if he had been afflicted with a ridiculous clown getup). In any case the churros were a far cry from the fabulous churros we used to pounce on when school let out in my native Casablanca and which still make my tongue smile: I suspect the oil the churros had fried in at our dinner was much too hot, causing the dough to seize, darken and toughen; Chocolate espressos: Warm mint hot chocolate, coconut milk and almond foam. Guys, guys, guys, no more foam please, it’s just not working, sorry. Last course, Lime cheesecake, with saffron vanilla glass, cashew cinnamon crumble and chocolate orchid petals: a dreamy way to describe a charming mess that looked like a kindergarten arts-and-crafts project, and tasted only a little better.

To conclude: T-Fusion is a good restaurant, Marine Park residents are lucky to have it in their backyard, Chef Daniel Rivera can really cook, his selections of vegetables, meat and fish are impeccable, but I respectfully recommend he plan more realistic menus, and work harder on his flavor-texture contrasts and his desserts.

We couldn’t go table hopping in the cramped space, but I had the pleasure of being seated with Mendy Delfin of The Chosen Bean, Connie and Dr Alan Kadish of Touro College, Gloria Kobrin, Norene Gilletz and many more. It was a pleasure to acknowledge the honorees’ accomplishments: Naomi Nachman The Aussie Gourmet, Elan Kornblum at Great Kosher Restaurants, Kim Kushner Author of  The New Kosher Cookbook, Douglas Soclof at KitchnSynch, Phyllis Koegel Marketing Director at the OU Kosher Certification Agency, Herman G. Rowland at Jelly Belly Candy Company, and lastly Norene Gilletz, who received the Gil Marks Award from Gloria Kobrin at Kosher Cookbook and was too choked up with emotion to say two coherent words of thanks (dearest Norene, I thought Big Girls Don’t Cry?!?). It was great meeting Cole Rosen of Integrated Supplements, Rabbi and Yehudit Girshberg of De La Rosa, Amy Kritzer of WhatJewWannaEat

On to Kosherfest 2015: Menachem Lubinsky was my fellow trailblazer in the then-burgeoning Upscale Kosher Food Scene, circa 1979 and beyond, so I keep a very fuzzy soft spot for him. Every year I write a review of Kosherfest, and my 2011 Kosherfest Review was our last Kosherfest event together with the late esteemed Gil Marx, my neighbor, friend and cooking buddy. Tuesday November 10th, first day of Kosherfest is when the Authors Corner took place. I was not displaying this year as I’ve been doing every year (I had been recruited for a cooking demo), but it was great to have all my soul sisters displaying their beautiful books: Daniella Silver, Kim Kushner, Victoria Dwek and Leah Shapira, Miriam Pascal, Mia Adler Ozair, Elizabeth Kurtz, Paula Shoyer.

My Cooking Demo was scheduled for 11 am on Wednesday. I loved my escort Dawn Lerman, author of the wonderful brand new book My Fat Dad. Lovely new Kosherfest event co-ordinator Lora Burns gave me carte blanche on menu and brands to showcase at my demo, and I decided it would be Empire Kosher Poultry and California Gourmet Vegan Chocolate Chips. It was wonderful meeting California Gourmet Owner Chana Schusterman (oh boy, is she cute on top of being so talented!) but much less wonderful not hearing a peep from Empire before, during or after the demo: if their service is indeed endowed with a PR department, they hide it remarkably well! From one professional to another: Heimish is good but not in ALL occasions: Just sayin’!

Our demo theme was: Dinner in a Jiffy and in Good Health, and by all accounts I delivered, and then some. Menu: Quick Chicken Miso Soup; Chicken Breasts Mole Sauce, Sausage Kale Frittata; Smoked Turkey Waldorf Salad. Guys, all recipes are on my blog and my latest cookbook! Always a pleasure working with Jesse Blonder of the Center for Kosher Culinary Arts and his able assistants. Best of all, great fun prepping with very young and very talented Chef Eitan Bernath; it was all I could do not to peck his cheek! Eitan is a natural, and I hope someday soon I will prep with him for his demo. Treat those kids well, I tell you: they are tomorrow’s stars! I didn’t taste any of my stuff as I wanted to stay on the Dairy side, but I was told it was all delicious, and it was the best Mole ever. Ole for Mole!

I so enjoyed watching equally talented and exciting Chefs Bryan Gryka, Albert Bijou and Jasmine Einalhori duking it out at the Kosherfest Cooking Competition. All plates looked wonderful, and I am sure picking a winner was tough, but Judges Joshua Massin, Dr Alan Broner and Jamie Geller awarded the prize to beautiful, spirited and passionate Jasmine.

New Kosherfest products: Sometimes a company calls new products something as meaningless as, say, new color sprinkles added to their line of chocolate-covered pretzels. I ask you: Who needs it? So we won’t mention these or other similarly forgettable so-called innovations.
Other times, rarely enough but no less bewildering, a new company will have their staffers sit at their booth with absolutely nothing to say or to sample, just displaying their brand name and a half dozen sealed and off-limits containers of their products; picture this: I spotted a chocolate company, and a cheese company doing just that. Clueless….
Not much on the artisanal bread front, just a couple coffees and teas, some terrific smoked fish line products (so sorry I can’t retrieve their line brands). Petrini Ice Cream not at the show:-( New line of Asian Condiments called Koko (Can’t retrieve them): not as delicious as it could be, but it would still be great to be able to retrieve them

Mentioning just a few of my Kosherfest 2015 favorites: Check out their sites!

Yehudith Girshberg of De La Rosa Real Foods and Vineyards gushed about one product in her and her husband’s gorgeous line: Black Tahini Paste; she sent me home with a small container of it, which morphed to breakfast the next morning. I unabashedly licked the empty container with a finger. Yup, Yehudis is right: Her Black Tahini is a major winner. Hey Yehudis I already got a couple fantastic dishes up my sleeve using your black Tahini, let me know if you would like to feature them on your line, it would fun to team up!

Makabi Cheeses: We feasted on Makabi’s Bleu, Mancheli, Goat Cheese Spread and Emmenthal. Verdict: Fabulous line! You guys are impossible to find, so I can’t link to you, still I’m hoping you are reading this. Don’t you want to be found? Thought so!

Vivo Raw Chocolate Even the 80% cocoa bar was smooth and creamy, and I couldn’t get my hands off the bark.

Jack’s Pulled Brisket: One of this year’s winning new products. How convenient is this when you have a yen now for a pulled brisket sandwich dripping down your elbow?

Kvutzat Yavneh: Their pickles, oils and olives are a real class act!

Wild Hibiscus Syrups and teas. Get wild in your kitchen, with just a few drops of the good stuff!

Galil Their roasted chestnuts and their stuffed grape leaves are staples at my house. Superior product line.

Elegant Desserts: I have been using their chocolate logs at dessert “slicing” stations. Some conversation piece!

OK y’all, I hope your products fly off the shelves, and you always grow Bigger Better!