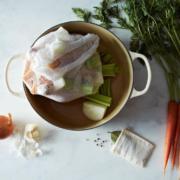 A fan of my cooking demos recently bought me this very low-tech marvel: Wrap and Boil bags: I love’ em: They are very elastic large expandable cheesecloth tubular pouches, sewn in at one end, so you put anything you like, and tie the bag at the other end. This past Shabbos I so wanted to showcase the bags I made nothing else except the salad beside the Cholent. I put my spelt berries in one of the  bags, closing at the far end to allow for the grain’s expansion during cooking. then I made a bison meatloaf and put in in another bag, tying this one very close to the meat so the loaf comes out good and firm and easy to slice. then I put my potatoes, liquids and all seasonings in the pot, making sure both bags were buried deep in the pot, and covered with the liquids. At serving time, I opened the grain bag and poured the beautiful grain onto a bowl. then I opened the meatloaf bag onto a platter and sliced it, with the potatoes and gravy around it. I sliced the loaf and served it with mustard. So Cholent really consisted of meat, potatoes and grain, each one standing on its own and tasting as beautiful as it looked. Incidentally, growing up in Morocco, this is precisely how we served cholent, it was always a feast.

I will try them for a bunch of other stuff: the first thing that comes to mind is, putting fish, chicken or meat bones in the bag in a pot where a stew is cooking, and removing the bag as is, with no mess  whatsoever. Think about all the scrumptious bones and scraps you might have naturally and effortlessly inherited from a Turkey Dinner! Chicken soup, fish soup, turkey soup? All aboard in the Wrap-n’Boil Bags!

A Date at Wolf and Lamb Restaurant